The new network install functionality for Raspberry Pi 4 and 400 makes life easier for hackers, but also and above all for beginners.

Making an old game console, media player or mini computer with a Raspberry Pi involves combining many elements of hardware and software. For some, the fun lies precisely in choosing the best case, buying it, unboxing it, carefully assembling it, the best memory card, the best software, etc., than using the final product.

On the other hand, others don’t know where to start. is that you do not install an operating system on a Raspberry Pi like you do on a computer. You have to download an “image” writing program, find its operating system (“distribution”), download the correct image (32-bit, 64-bit, ARMv6, ARMv7, ARMv8?), then write it to a microSD card (or more recently to a USB key ), all from another computer.

At least that’s what we had to do until the launch of the network install function (Network install), which allows you to install an operating system directly from a new Raspberry Pi.

Instead of a vague diagnostic screen, you’ll now get a screen telling you there’s a Raspberry Pi Imager, with a QR code pointing to the help page, and specifically asking you to press the Shift key on your keyboard to start the installation process.

It will then be necessary to connect the Raspberry Pi to the Internet via Ethernet cable (does not work over Wi-Fi due to lack of space in small internal memory), so that Raspberry Pi Imager is downloaded and run from RAM. 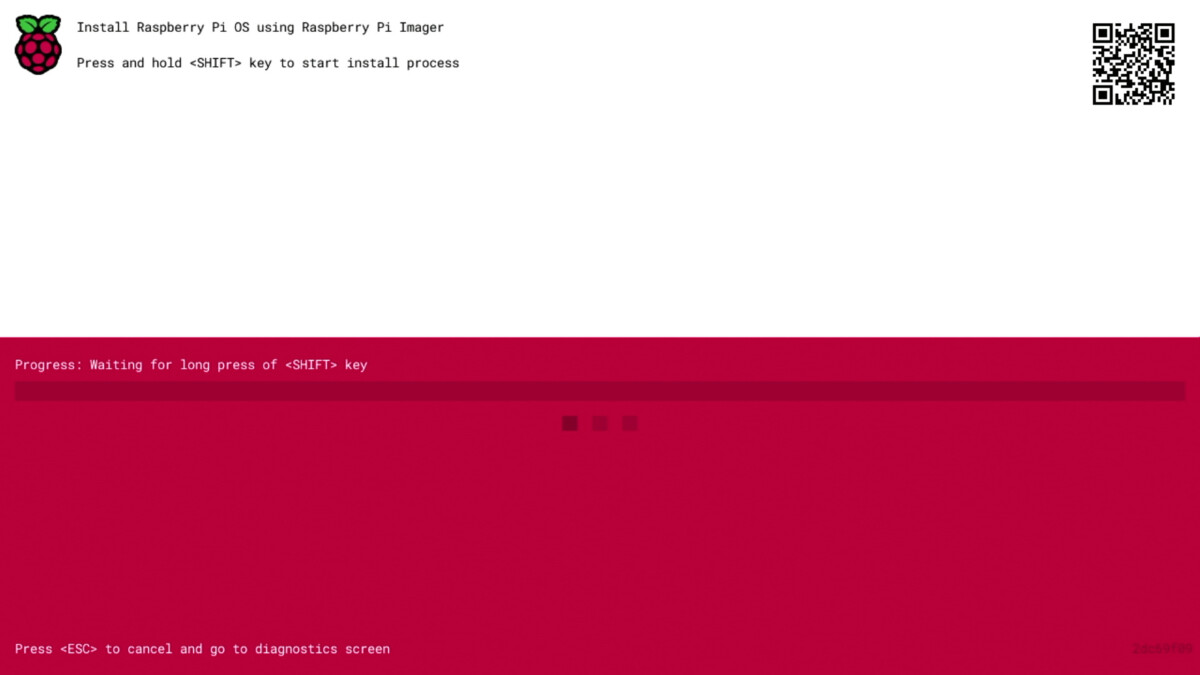 Get started with Raspberry Pi Imager

A few seconds later we find ourselves facing a Raspberry Pi Imager, the same easy-to-use installer we’ve used up until then on our PC (often replacing balenaEtcher).

It can be used with the keyboard, arrows, tab, and the enter key, but it can also be used with a mouse. If you are looking for a practical keyboard and mouse to occasionally play with the Raspberry Pi, we recommend the Logitech K400 +, which is regularly sold for 20 or 25 euros instead of 40. 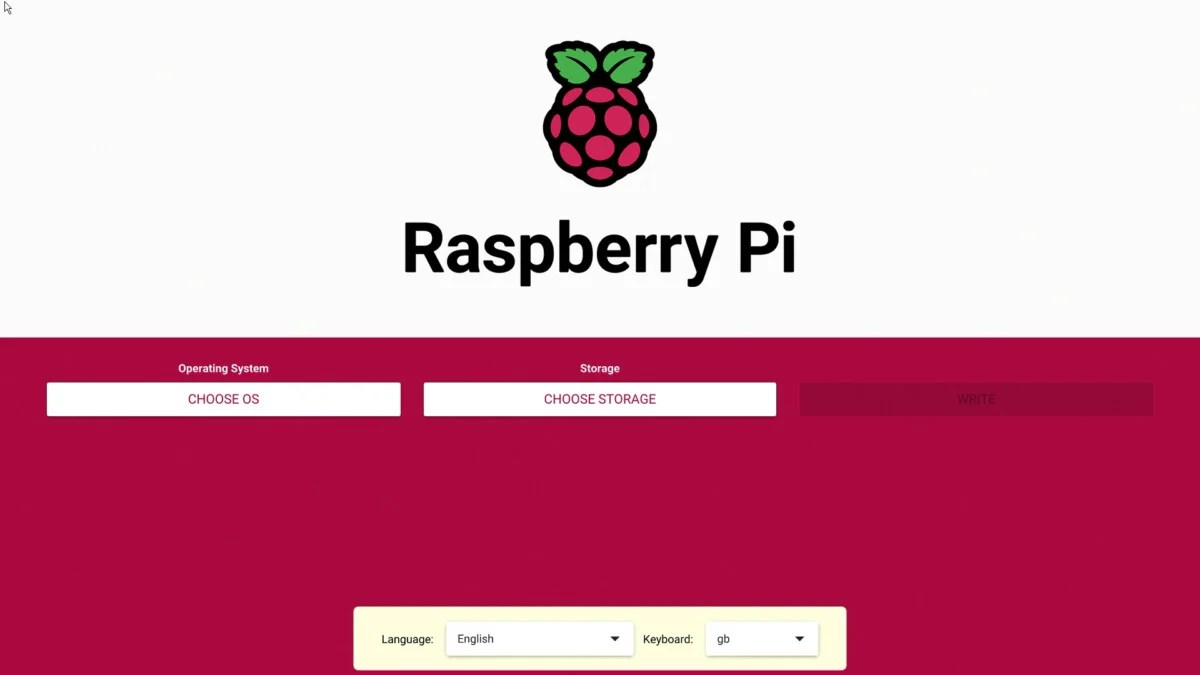 Side by side computer or mini server

The Raspberry Pi 4 and 400 are still far from offering the performance of traditional computers, but they can be used as an additional computer, for quiet surfing the Internet for example.

The Raspberry Pi OS is ideal for this. On the other hand, we recommend using the new 64-bit version, not the 32-bit version which is still selected by default. in the list Choose the operating systemso we have to choose Raspberry Pi OS (other) → Raspberry Pi OS (64-bit). The “Lite” versions do not have a graphical interface and are intended for server use. There is also Ubuntu or Manjaro, but we advise you to familiarize yourself with the Raspberry Pi OS first, as you will find help most easily on the Internet.

If you choose Raspberry Pi OS, you will find a menu ⚙️ Advanced Options The Raspberry Pi Imager appears on the main screen. Allows you to preconfigure the main settings, including the keyboard layout (Setting Locale → Keyboard Layout → ar), the Wi-Fi network, and the username. Make sure to check the father in the list keyboard from Raspberry Pi Imager before opening this menu and entering passwords.

You can use an Xbox or PlayStation console, wired or wireless, one of the many retro console versions from the 8BitDo specialists, or even one of the official copies from Nintendo Switch Online, if you can get hold of it.

Raspberry Pi Imager also offers two major multimedia distributions for the Raspberry Pi here, both based on the popular Kodi software: LibreELEC, the more popular, or OSMC, both simpler at first glance and more customizable.

There’s also Volumio, which turns a Raspberry Pi into a music player, to be used without a screen, but via a web interface from a computer or phone, to create speakers” Connected We recommend adding a DAC to the Raspberry Pi, because the built-in audio output is average. HiFiBerry, for example, offers “HAT” modules and appropriate boxes.

Know that it is not necessary to choose between old games and multimedia. Recalbox includes Kodi and RetroPie allows you to install it.

How to enable network installation

This network installation functionality will soon be integrated into the Raspberry Pi 4 and Raspberry Pi 400. But as of March 10, 2022, it is still in the testing phase and a version must be installed manually. beta The boot loaderthe program that runs the startup of the Raspberry Pi.

a beta It’s rarely completely risk-free, but bootloader beta It has been available since February 8 and according to our testimonials and findings, it is reliable. Provided you are vigilant during installation and take special care not to disconnect the power supply or the memory card during transportation, there is no danger of ” Labneh His precious Raspberry Pi.

to install this bootloader betaYou need a free microSD card (its content will be erased, but you can reuse it immediately after a fresh install), a microSD card reader, and you must use (for the last time?) Raspberry Pi Imager on another computer.

in the list Choose the operating systemyou have to go down to miscellaneous utility images (“Miscellaneous Tools Pictures”) and select Bootloader beta test. We were finally asked to choose the priority storage medium on startup. Boot SD card It is the default setting: if a microSD card and USB key are inserted, the Raspberry Pi will boot the microSD-installed operating system. This is something we recommend if you don’t have a good reason to choose another.

Anyway, to access the network install (Network installation), it will be necessary to insert a microSD card or USB medium without an operating system, or remove it while the Raspberry Pi Imager is running if you wish to reuse it.

It remains to choose microSD and click He writes to move boot loader.

There you go: Once you rely on another PC, your Raspberry Pi is now more independent than a PC or even a Mac (which offers the ability to roll back to the latest version of macOS). via Internet) !

There’s still one last challenge: acquiring the Raspberry Pi, a victim of shortages. We recommend using the rpilocator website, which monitors availability at several sellers, including the main authorized French distributor, Kubii.