Present on over a billion computers worldwide, the Windows operating system provides a unique platform for video game enthusiasts. Microsoft was clearly content to reap the rewards of its success, but chose instead to support gamers by introducing new technologies and new services. The launch of Windows 11 is the culmination of this approach, especially since close cooperation has been carried out with its long-time partners to get the best out of the components.

The Asus TUF Gaming A17 laptop is the perfect example of this promising technology union. It takes advantage of both the experience Asus has gained in hardware and the new features introduced by Windows 11, all at a reasonable price in Boulanger (1,399.99 euros).

One thing is for sure, however, the Asus TUF A17-TUF706IE-HX030W laptop does not seek to hide the true gaming identity. The honeycomb lid provides wide openings while maintaining a solid construction. Since thermal management is a key factor in this type of device, the manufacturer has also integrated heat pipes and three radiators to maintain a constant temperature throughout the system even during intense gaming sessions. 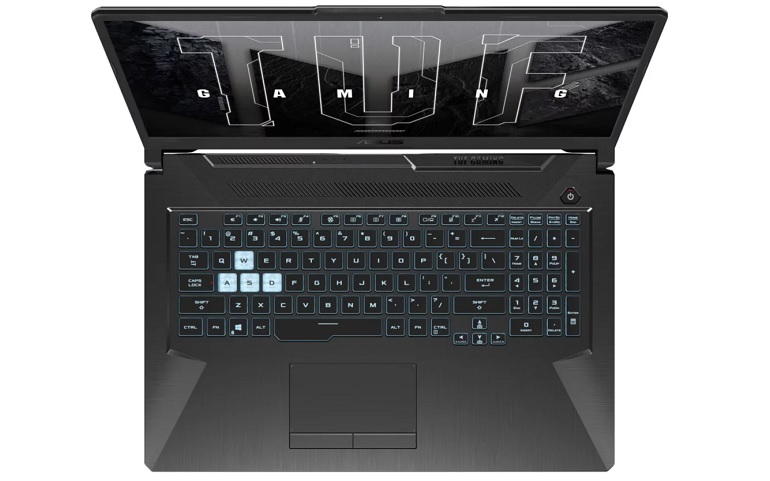 Its large screen of 17 inches (43.9 cm diagonal) benefits from Full HD definition (1,920 dots x 1,080) and most importantly, the screen refresh at 144 Hz! Ensuring an ultra-smooth video game experience, a must-have for any self-respecting gamer. The screen is also protected by an anti-reflective coating to provide a consistent experience even when conditions of use are not ideal, such as on the go.

Despite being a gaming PC, the Asus TUF A17 offers great versatility with a battery life of 9 hours, and above all, it remains portable thanks to the (relatively) small size of 2.6 x 26.9 x 39.9 cm. It must be said that Asus has done its best to reduce the limits and improve the size of this laptop.

Asus has built a powerful machine, backed by an efficient cooling system and whose architecture is based on modern components like the new nVidia GeForce RTX 3050 Ti graphics card. The latter is based on a graphics processor Ampere For much higher performance than the GTX 1650 found in some brands. It also introduces Ray Tracing technology that improves realism, without losing sight of innovative AI-based functions such as DLSS And the broadcast.

This graphics card is united with an AMD Ryzen 7 (4800H) processor powered by 8 cores (16 threads or logic processors in total) and clocked at up to 4.2GHz. There’s also 16GB of RAM and 512GB of SSD storage for an optimal experience (especially load times). Asus has also been generous in connectivity by offering WiFi 6 (AX), USB 3.2 ports, USB Type-C, HDMI, audio-out jack, and Bluetooth.

Such a machine would obviously be nothing without an efficient system for routing it, and that’s where Windows 11 comes in.

Windows 11: These functions are designed for gamers

Windows 11 offers its share of new features, especially in terms of the graphical interface, but under the surface there are also additions that deserve your attention:

This function is intended to speed up the exchanges between the various components of the computer. So far, data has been flowing between the SSD, RAM, processor, and graphics card, a long journey that has reduced performance by creating a bottleneck at the processor level. To avoid such a situation, the system DirectStorage It turns the CPU so that the information flows directly between the SSD where the video game is located, and the RAM and graphics card which will be the most requested item for this type of task.

This functionality is present on Xbox Series S and X, and is also available on PC via Windows 11. As its name suggests, it applies HDR (High Dynamic Range) processing to modern games (DirectX 11 and 12) for better lighting and contrast management.

Windows 11 has the app X-Box Originally which means access to Xbox Game Pass and its own game catalog, as well as a cloud gaming service. An all-in-one gaming experience for all enthusiasts.